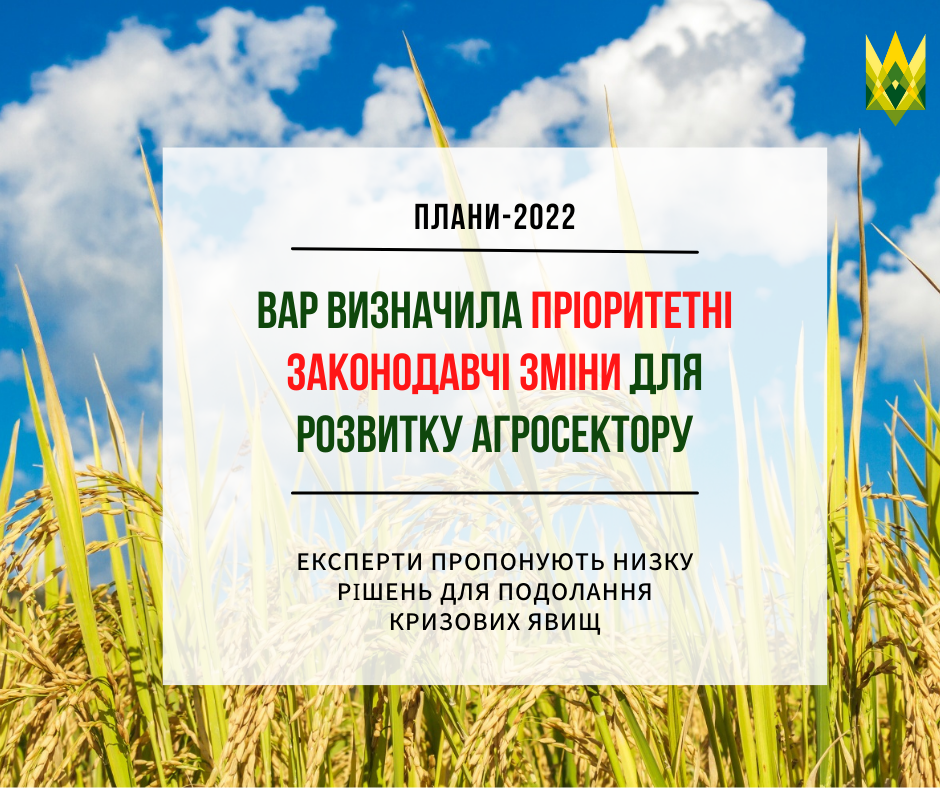 In 2022, the agricultural sector faces many challenges and issues that need to be solved. Experts from an analytical center “Smart Country” (which was founded by the UAC) have already developed a number of proposals to overcome the crisis.

This is one of the most problematic issues that needs to be solved quickly. The reason for rising food prices was sharp rise of energy prices, especially natural gas. The cost of products will also be affected by the situation with fertilizers and plant protection products, the shortage of which will be observed this year. Their production in the world is also suspended to save energy.

"This problem affects both consumers and producers. After all, with such a price increase, the purchasing power of population falls and, accordingly, the consumption of products decreases. And this is a threat to everyone who works in the domestic market. If people are not able to buy products at the price at which the farmer can sell them, then this is a complex problem," the UAC Deputy Chairman Mykhailo Sokolov mentioned.

To resolve the situation, it is necessary to implement a set of measures that the UAC has insisted on for a long time. Firstly, to adopt a draft bill on regulation of the relationships between networks and manufacturers, supplemented by rules that would limit the markup on socially significant products. Currently, the markup is estimated at 30% -35%. The second proposal is to reduce the value added tax (VAT) rate. Europe is already preparing to adopt amendments to the European directive, according to which the VAT rate on food is reduced from the allowed 5% to 0%. In Ukraine, the VAT rate is still 20%, which is an extremely large markup.

Prevention of fertilizer shortage in Ukraine

In order for Ukrainian farmers to be able to successfully complete the spring sowing, the UAC will monitor the situation on the fertilizer market. The association intends to become a participant to a memorandum to be signed with fertilizer producers to ensure sufficient fertilizers in the domestic market. Currently, the association’s participants are interviewed on providing fertilizers in order to react in time when there is a threat of shortages.

The draft bill 5202-d “On Water Users’ Organizations” is waiting for its adoption in the second reading. Agricultural producers, especially from the southern regions, have been waiting for its adoption for a long time, as it gives them an opportunity to invest in irrigation networks and attract investments. This can be done through Water Users’ Organizations (WUOs), in which agricultural producers will be able to unite after the adoption of the draft bill.

The practical implementation of draft bill 5202-d is a pilot project on Water Users’ Organizations establishing, which the UAC is implementing jointly with the USAID Agricultural and Rural Development Program - AGRO. The project plans to create WUOs, its regulatory documents, technical requirement for modernization of irrigation infrastructure and expanded information on the work.

Continuation of the reform in the grid connection sector

The UAC experts will work to create opportunities for the emergence of local distribution system operators (ODSs), which would own small distribution networks to connect directly to the States’ Energy Service networks, bypassing the Regional Energy Service. Thus, the monopoly of the Regional Energy Services on connection to power grids will disappear. After all, it is impossible to solve the problem without competition in the market. In addition, the UAC experts have already developed a set of amendments to the legislation aimed to improve the conditions of power grids connection in order to reduce the cost, simplify and speed up the process.

To oblige all players of the agricultural sector work legal

In 2021, a great step was taken in this direction – the draft bill 5600 was adopted, which introduces a tax per 1 hectare. However, a number of unresolved issues remains. In particular, regarding the operation of the SM KOR system and the blocking of tax invoices. The operation of the system currently raises many questions due to the constant risks of blocking tax invoices, and even those companies that operate legally.

The UAC experts are working on proposals to change the system, which would introduce partial control over the transfer of goods ownership rights. The goal is to ensure that grain, purchased from individuals, enters the system legally and is tracked. It is also necessary to make changes in the work of the SM KOR system, so that employees of tax service could not block invoices if they see movement of the goods completely.

The situation with the possible prohibition of some certain types of plant protection products (PPPs) shocked farmers at the end of 2021, as such a decision threatens to reduce yields and large-scale losses to the economy. The importance to prohibit some PPPs is because of their harm to the environment. However, the reason is not in the products, but in non-compliance with the rules of their usage and lack of control over it. That is why the UAC proposes to adopt amendments to the legislation that would establish that the instructions for the products usage are not just recommendations, but regulations that must be followed by everyone. The UAC experts will work on changings the legislation in the PPPs usage sector in 2022.

Intensification of work on the tax subsidy

A tax subsidy is a mechanism for financing parties or public organizations, which provides for the possibility for any individual to allocate part of the tax already paid by him to finance these organizations. Ukraine already has a system according to which political parties receive state funding. Therefore, changes should be made so that taxpayers can decide which party or public association they want to finance. Moreover, they must be able to indicate what specific actions they expect from this party or organization. Thus, created mechanism will force any government to work for the benefit of taxpayers and for economic development.

This area is extremely promising for the agricultural sector in particular and for the economy as a whole, as it creates high added value per 1 hectare and provides revenue to the budget. The UAC experts will work to simplify the procedure for registration of plant protection products varieties - all that ensures the cultivation of horticultural crops. Our goal is to provide Ukrainian farmers with the access to the most modern varieties and hybrids of cereals, legumes, vegetables and fruit, in order to be able to start the work of horticulture as fast as possible.

The Railways of Ukraine reform

Unfortunately, it should be noted that The Railways of Ukraine abuses its monopoly position in many cases, which leads to a deterioration in the quality of railways and logistics services. For example, the tariff for the transportation of goods takes into account the payment for security. But because the services are extremely poor quality, shippers have to hire private security. At the same time, they cannot refuse The Railways’ security services. The issue of writing off cars also remains relevant.

The UAC will continue to fight for implementation of commitments under the Agreement with the EU, which provides for the division of The Railways of Ukraine into an infrastructure operator, that remains state-owned, and transportation operators, that must be private and compete with each other.

Solving the issue of strip farming

"Chess" in the fields, when the owners of shares independently cultivate their plots, which may be located at different ends of the field, makes more difficult to cultivate the land and makes it more expensive. Currently, the Verkhovna Rada has registered a draft bill #5438-1 “On Amendments to Certain Legislative Acts of Ukraine on Land Consolidation", which aims to simplify the issue. According to it, the issue of land consolidation, no matter how many owners it concerns, should be considered in one court case.

In addition, the UAC experts are working on the draft bill that solves the issue of renting field roads, for the usage of which should be paid.

In 2022, the UAC experts will prepare a draft bill on the introduction of excise duty on sweet carbonated beverages in Ukraine. This practice exists in many advanced countries. After all, scientists prove that the consumption of such drinks is a significant risk factor for obesity and diabetes. At the same time, the funds from the excise tax on such drinks should be used in two programs - the fight against diseases connected with malnutrition and funding for the "School Milk" program, according to which children begin to receive a certain minimum of dairy products that they need for healthy development at schools.

In addition, the UAC will continue to work on resolving the issue of fuel licensing and on correcting discriminatory provisions of the law on weight control on roads. Relevant bills have already been drafted and are waiting to be adopted in parliament. The UAC experts will also work to simplify the construction of facilities - in this direction we need to reform the legislation governing the procedure for obtaining a construction permit and its control.