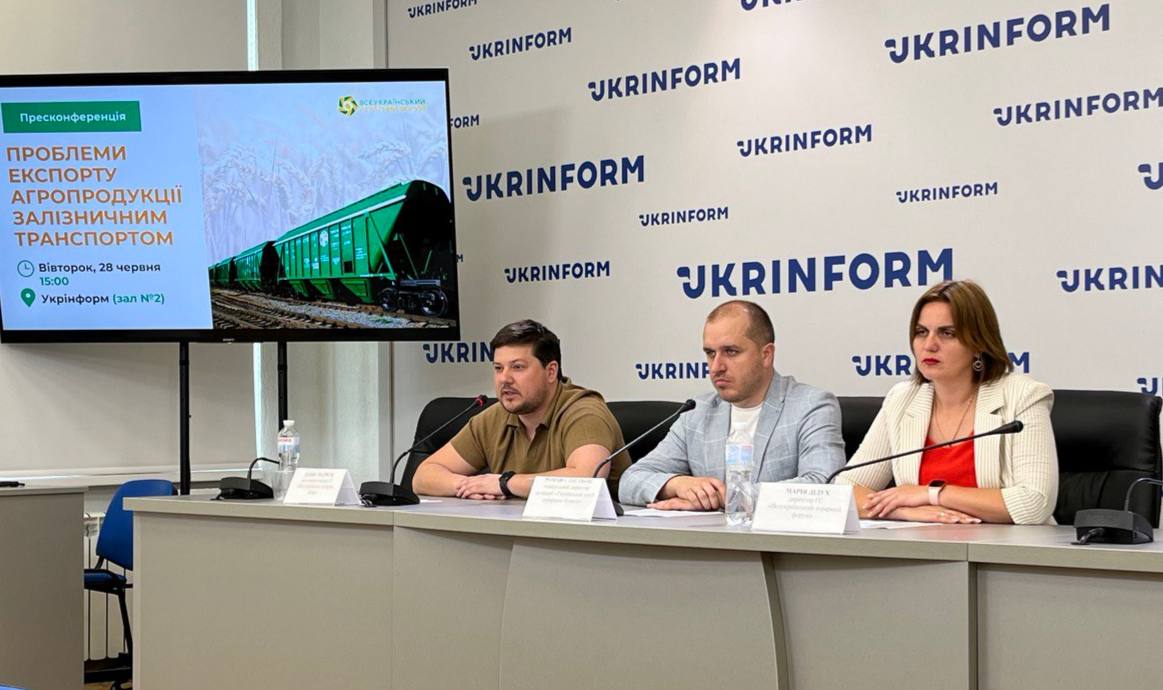 "The topic of food supply is discussed by the leaders of countries and international institutions almost every day. Exporting food and reducing the level of hunger in the world is an obvious priority. However, does Ukraine implement the existing potential of railway logistics?" said the director of the "Ukrainian Agri Forum" Mariia Didukh.

In May, 3.8 million tons of all cargo was exported by railway, among which 54% of exports are iron ore, while agricultural products make up only 20% of the total cargo turnover. This is a consequence of the fact that goods compete with each other for the ability to reach European ports by railway.

"When the world talks about the food crisis, certain priority should be given to agricultural products. If we talk about the economic aspect, then both the railway and the economy will benefit, since a ton of grain costs 2-3 times more than ore," is emphasized by the UABC General Director Roman Slastion.

Association "Ukroliyaprom" General Director Stepan Kapshuk also notes the economic advantages of exporting agricultural products. According to the expert, 1 tank of sunflower oil worth as 10-15 wagons with ore, and every third dollar in the agricultural sector is brought by oil. Despite this, there is almost no export of this product in general. In particular, for 27 days in June, only 82,000 tons of oil and 52,000 tons of meal were exported.

In addition to the problems of transporting products by rail is the fact that the cost and speed of transportation do not stand up to any criticism. For example, Kateryna Rybachenko, vice-president of the Ukrainian Agricultural Insurance Company and general director of the “Agro-Region” company, notes: "Some wagons wait in the queue for 90 days. However, it is almost impossible to hold Ukrzaliznytsia financially responsible for untimely delivery, instead, the shipper overpays every time. Penalties for downtime in a double amount are charged without appeal. In particular, the agricultural sector has to pay 7 billion dollars for additional logistics. If this happens, we will lose the agricultural sector of Ukraine."

At the same time, "Ukrzaliznytsia" is resuming auctions: the rate for the use of wagons on the first day jumped by 75% - from UAH2,167/day to a maximum of UAH3,801/day, and when using wagons for export, it tripled to UAH7,400/day. In addition, “Ukrzaliznytsia" has already expressed its intention to raise tariffs for freight transportation by 70%.

"Tariffs for grain transportation were raised by 30% last year. At the same time, UZ left different tariffs for different goods. For years, the transportation of goods with low value, such as ore, coal, crushed stone, was unprofitable. These losses were covered from the farmer's pocket. And now they continue to do it. Raising tariffs by another 70% will simply bury the agricultural sector," warned the UAC Deputy Chairman Denys Marchuk.

Solving these problems depends not only on “Ukrzaliznytsia”, but primarily on the Government and Ministries. In order for the priority of overcoming the food crisis to be not only in words and statements, but also in action, it is necessary:

Yurii Shchuklin, an expert on the logistics market and adviser to the Presidium of the Ukrainian Agri Business Club, adds: "Parks full of fleets, rising prices and more than 40,000 wagons in queues to cross the border - all this is related to the lack of quality transportation planning throughout the logistics chain. Implementation of “the responsible planning” system will allow farmers to virtually stand in line and not pay for usage until it is their turn to be transported. Out of 27 days, for which on average the senders of products currently pay, only 5 days wagons with cargo carry out any operations. That means, 22 days out of the wagon's turnover, the cargo owner pays only for standing in the queue, which is UAH500 per ton of products. Nowadays, there are only one question - it is to make a technical decision for consolidated, clear transportation planning, not only by “Ukrzaliznytsia”, but also by all transportation participants."

To increase the capacity of the railway, a greater involvement of railway operators in the EU is also needed - in Poland, Romania, Slovakia and Hungary first of all. After all, their capacity is also limited.

Nowadays, Ukraine is beginning to lose its reputation as an agricultural producer, discounts are being implemented on Ukrainian grain in the world, since it is not known what its quality will be at the time of arrival to the buyer. In order to avoid catastrophic consequences for the agricultural sector and real solution to the global food crisis, it is necessary not only to declare the priority of food exports, but also to implement the developed solutions in practice to increase them.