Economist of the Investment Department of the Food and Agriculture Organization of the United Nations (FAO) Andrii Yarmak called “insidious” the act of milk processors, who on the eve of the New Year unilaterally decided to reduce raw milk prices by 10%. He wrote about this on his Facebook page.

"Did processors do a cunning thing by lowering milk prices before the New Year so that farmers could not fight back quickly before the holidays? Absolutely!” he said.

According to the expert, today milk producers cannot offer any alternative to the openly weak milk processing industry in Ukraine. Price misunderstandings between milk processors and producers will continue until the last one begins to control the market.

"I do not believe that the old management of old dairy farms (with a few exceptions) will be able to radically change something in the milk processing sector. And until the producers create their own, really cooperative (not of cooperative type) processing factories with modern equipment, management and marketing, a quality product that will be interesting at the international level, nothing will change," said Andrii Yarmak.

"According to the results of 2021, for almost 5 years it has not been so bad with the profitability of dairy production as this year! Milk producers have earned 14% less than in 2020 and as much less than the average for the last 5 seasons before! Last year was the worst for the last six seasons and one of the worst in terms of revenue historically. It was worse only in the crisis years of 2015-2016!” he noted. 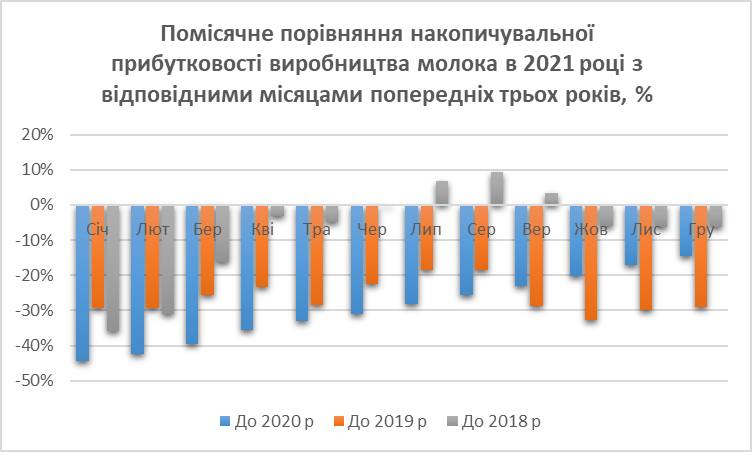 "UMI is often declining as usual in January, because demand is falling. The average decline of UMI over the last 10 years in January was 2%, and in recent years UMI fell steadily, and the decline tended to accelerate. At the same time, the world dairy market has been growing steadily. Protein and cheese broke records, and milk fat came close to them. But our processors will hardly take advantage of this trend. And we already know that milk prices were reduced. Therefore, obviously, UMI will fall in January 2022 again and the crisis of profitability of dairy production will be worsen," the expert concluded.

*UMI is the ratio of the extra grade raw milk price to the cost of concentrated feed ration in commercial farms. The UMI dynamics clearly shows changes in the profitability of milk production regardless of inflation and devaluation, because these two important factors are taken into account in the equation due to changes of feed and milk prices. At the same time, depending on changes in efficiency levels, in some farms UMI may grow faster or slower.