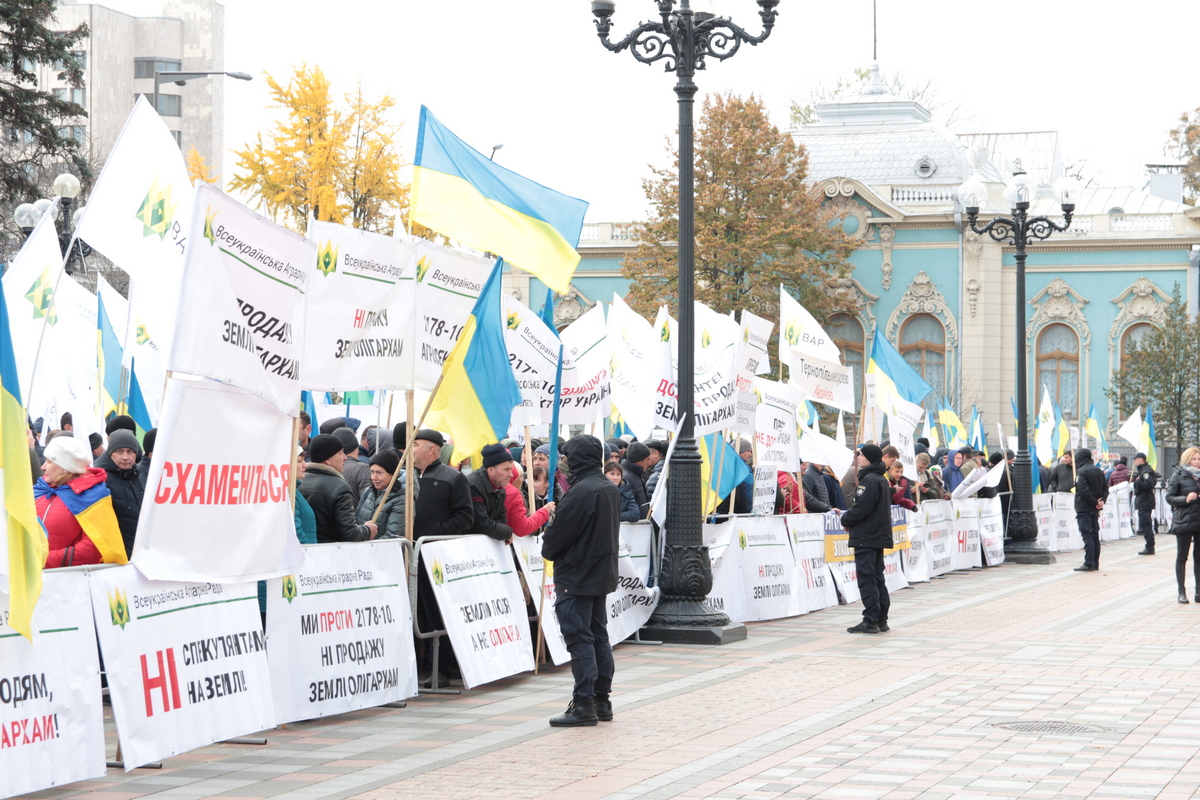 More than 15 thousand of  agrarians, farmers, volunteers and activists have come up to the Parliament today for the protest organized by Ukrainian Agri Council. The participants of the action speak out against the land reform initiated by the authorities as it supports tycoonization of agrarian sector of Ukraine. However, small and medium-sized agri businesses that cultivates 75% of the country's agricultural land and provides villagers with jobs can be displaced from agricultural sector of the country.

Such consequences may appear in case of the bill № 2178-10 "On Amendments to some legislative acts of Ukraine on agricultural land turnover" adoption which instead of creating good conditions for small and medium-sized agrarian business development gives “green light” to agricultural holdings and leads to consolidation and strengthening the position of oligarchs in agricultural sector of Ukraine.

This bill sets extremely large limits on land ownership “in a single pair of hands” - up to 210 thousand hectares (0.5% of the country's agricultural land). But this restriction also can be circumvented to control much larger land masses. Yes, the bill does not provide prohibition on the purchase of corporate rights of other companies. This means that one company can buy as many other businesses as they want, even if they have already reached the ceiling of "official" land purchase limits and concentrate 400, 600, 800 thousand hectares of land or more. Whole villages, consolidated territorial communities (CTC) and even regions would come under such control.

“Agrarian sector of Ukraine today - is small and medium-sized business that is near the Verkhovna Rada of Ukraine at this moment. But its position was not taken into account neither in the first bill offered by the Government which they wanted to adopt earlier, no in the second one offerd by People`s Deputies which is intended to be adopted now. Therefore, we have one demand - to scrap both bills. Then to hold public debate on land reform and referendum. After that to work out and submit the bill that will be supported by Ukrainian society. And only then to vote for it” - said the Chairman of Ukrainian Agri Council Andriy Dykun.

The bill № 2178-10 was already supported by the deputies of the Verkhovna Rada Committee on Agrarian and Land Policy during its "secret" meeting, which could not be attended by either representatives of relevant organizations, agrarians no public activists. However, farmers emphasize that this bill is not economically advantageous to the country.

“Today is a crucial period in the history of independent Ukraine because  of  quintessential bills adoption. These bills will result in federalization in the form of latifundia. We are against the fact that 20-30 people will own Ukraine ”said the Head of “TAK-Agro” company  - Ruslan Golub.

The owner and director of PAE "Piskivske" Valerii Kolosha emphasised that such land market model is a direct threat to dairy farms. This means that Ukrainians could be left without their own dairy products.

«Livestock  decreased for 26 thousand at the enterprises in Ukraine in the latest 9 months. Why? Because we understand: a cow cannot exist without land. It requires 1 hectare of land as pasture per cow. Without this we will not be able to keep the livestock. But where to take money and how to buy land? That is why with the start of talks about launching the land market farmers began to cut their livestock to raise money for land buying. And that means that Ukraine can be left without milk” the farmer said.

After announcing their demands near the Parliament protesters went to the President's Office where they delivered the message to the Guarantor in which they appealed to him to secure the adoption of the bill on the land market that would create good conditions for the development of small and medium-sized agri businesses, but not the one that would strengthen the status of oligarchs and legitimize the creation of megalatifundias in Ukraine.