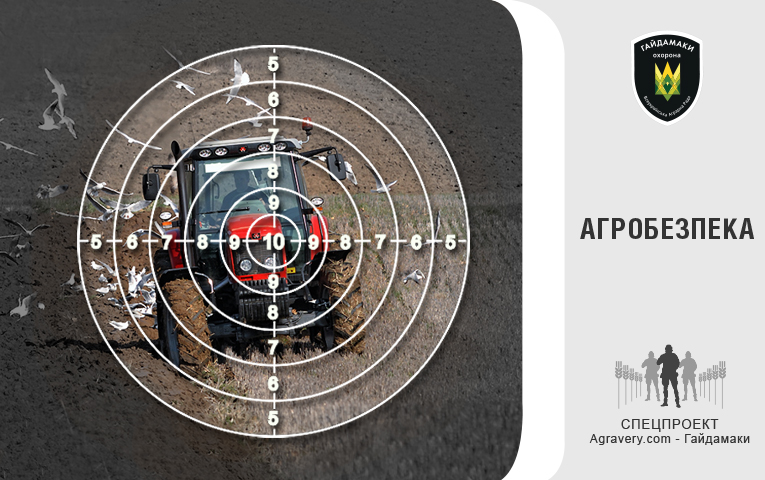 Recently, attacks on farmers have increased in Ukraine, with deaths in some places. OK “Haydamaky” has analyzed all the cases and advises for farmers on how to protect themselves and their businesses.

The Dnipropetrovsk region has the leadig number of agrarian killings over the past two years. In the last two years, four farmers have been killed. The first murder took place in Kirichan district in December last year. The victim was a farmer and a deputy of the district council. The killer took the farmer's car and money: 50 thousand UAH and 20 thousand dollars. The wife of a 58-year-old landowner thinks they want to remedy the case because the investigation is still ongoing.

Three more farmers were killed in Dnipropetrovsk region this year. Experts associate the events with the signing of the decree by the President of Ukraine “On measures to counter raiding”. The three murders have something in common: shortly before or some time after the tragedies, the farms of the murdered agrarians were mysteriously re-registered. There is a certain algorithm: criminals find a company with a small land bank (4-5 thousand hectares), through unscrupulous registrars using fake documents, the farm is re-registered, and farmers - legal owners - are killed. All the farmers before the murder were offered to "sell" the company by some unknown persons. The investigation is still ongoing.

In May 2019, in the Vinnytsia region, a married couple of farmers, who were growing apples, was killed. The perpetrator took away a safe with cash in excess of UAH 1 million. The suspect was detained. He was the driver who transported the apples. The man worked for that couple  for several months and was well aware of their wealth.

In April this year, a 42-year-old head of a farm, a deputy of a district council and a member of a land commission was killed in Fastov.

There are ongoing investigative efforts to identify those involved in the crime, and various versions of the murder are being considered. It is known that before his death, the agrarian had a serious conflict with unknown persons. In the fall, when a farmer wanted to harvest from a field that he had been cultivating for 20 years in a row, it turned out that the land belonged to new owners - the raiders who had taken it illegally. The owner of the farm prepared the claim in court and aimed to get back the lost land. Criminals are wanted.

In May this year, a 71-year-old farmer and his wife were killed in the Berezneguvatsky district. The woman was struck with an ordinary kitchen knife and the man was hit with a stick. The perpetrator knocked the door open and broke into the house where the tragedy had taken place. He stole a cellphone, jewelry and ducments.

The killer was a 44-year-old resident who had previously worked as an accountant for a fallen farmer and was fired for fraud. Now he faces a life imprisonment with confiscation of property.

The farmer, who is protected by “Haydamaky”, received constant threats from unknown persons by phone. He bought the farm a few months ago. A group of unidentified persons came to him and demanded to give them more than 2 million UAH as debt of the previous founders. Otherwise, they threatened to punish the whole family. The head of the law department of the Security Company advised to apply to law enforcement agencies to open criminal proceedings against criminals and take the measures provided by the current legislation aimed at ending criminal activity. The security unit of the security company provided round-the-clock security for the agrarian family and the farm. As a result, the criminals retreated.

To protect yourself from ordinary burglars and people who know too much about your possessions, the farmer should act like the rest of the public - guarding homes, installing "alarm" buttons, and more. However, if the attack is triggered by farming activity, certain safety rules must be followed.

What needs to be done to minimize the likelihood of "strangers" appearing in your business?

If you want to get a round-the-clock legal support, force protection and media support, enter into contracts with trusted entities.